The European Encounters of Jesuit Alumni were organised in Rome from 14th to 17th September 2016. On this website you will find the text of most of the speeches, some participants reports, a collection of pictures and a press review.

WITH THE SUPPORT OF

Message of the President

Our European continent may be facing its greatest challenge since WWII. Migration to Europe from other continents and regions of the world of people seeking asylum or fleeing an undignified life, has become an issue for its humanitarian implications and also for our society due to the direct and huge impact at the cultural, religious, social, political and economic levels.
Armed conflicts, natural hazards, and economic crises in places all over the globe have triggered massive displacements of population which threaten to overwhelm our capacity to res­pond adequately, that is, both with humanity and order, and have generated a clash between two sometimes conflicting loyalties – the desire to embrace otherness and the attachment to our identity – which risks breaking the cohesion and the unity of our continent, a great achievement of our recent history that we used to take for granted.
It is time that Europe, as a community of destiny, starts reflecting around this issue, that is not likely to disappear any time soon and could even become more important as long as steps are not taken in the direction of preventing the migrations where they originate, by tackling the root causes that are triggering them: poverty and social despair, violence and oppression, climate change. As European citizens and as Christians, we are called upon to take an active part, modestly, but ambitiously at the same time, in this daunting task.

The European Confederation of Jesuit Alumni (ECJA), being aware of this unfolding situation, wants to help approach the problem in ways that can be described as Jesuit, leading them to be “Contemplatives in Action”. For that purpose, it has set up the European Encounters of Jesuit Alumni, taking place in Rome, from September 14th to 16th 2016, an event in which we will be confronted with the migration crisis in a reflexive way, providing a glimpse at its different root causes, the challenges it poses, the response of the various actors and our possible role as bridge-builders and problem-solvers.
Under the title of Global migration and refugee crisis: time to contemplate and act, these European Encounters promise to be a series of moments in which we will enrich ourselves intellectually, open up spiritually and be touched emotionally. To organize this event, we have teamed up with the Jesuit Refugee Service (JRS International), a NGO created in 1980 by Father General Pedro Arrupe. With their help, we will have the opportunity to attend conferences offered by renowned experts in the field, which will help us understand the complexities surrounding migration in a holistic way. We will also have the opportunity to share with first-hand actors, what it means to be a refugee in a city like Rome and how we might help when we are back home, starting from the way we look at them. We will as well be able to interact with migrants who benefit from the actions of JRS and many others.

These European Encounters, which are preceded by a pilgrimage between Gubbio and Assisi (from September 10th to 13th), organized by the French Federation of Jesuit Alumni, will officially begin with the attendance of the General Papal Audience on Wednesday, September 14th. You will find on this website all information regarding the program and the practicalities (registration and accommodation).
As President of the European Confederation of Jesuit Alumni (ECJA), I cordially invite you to join us and share what promises to be a challenging and moving experience, as the encounter with the Other will inspire us to live our lives as true followers of Ignatius.

* A pilgrimage is organized by the French Federation of Jesuit Alumni between Gubbio and Assisi, in the footsteps of Saint Francis, from 10 to 13 September 2016.
All information to be obtained from François Lombard (flombard@turennecapital.com)

Proceedings of the European Encounters 2016

Session 1: The root causes and challenges of global migration

Session 2: Acting as Christians: What does the Church tell us?

Session 3: Integration of Refugees and Migrants in Europe

Private Audience with the Pope – Vatican

SUMMARY AND STORIES ABOUT THE EUROPEAN ENCOUNTERS

Pictures of the European Encounters 2016

Summary about the European Encounters of Jesuit Alumni in Rome 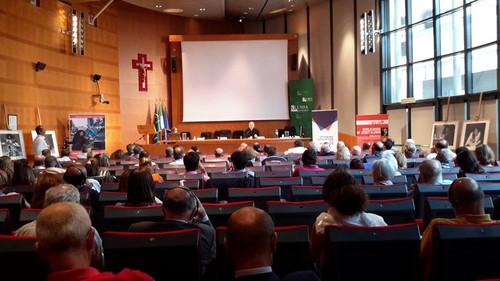 The three day encounters of the Jesuit alumni - 14 (afternoon) till 17 (morning) September 2016 - in which also members of the World Union council or their delegates participated who assisted at an extraordinary council meeting Friday and Saturday afternoon, began officially with a mass in the San Francisco de Borja Chapel at the General Curia on Wednesday evening. The conferences of the European Encounters were held at the LUMSA University in Rome.

Thursday morning was filled with addresses by Mauro Garofalo, Community of St. Egidio, Head of Intl. Relations, and Alain Deneef, President of the World Union of Jesuit Alumni and Board member of JRS Belgium to the topic “The root causes and challenges of global migration” and by Joseph Buades Fuster SJ, Director of CEIMIGRA, a foundation active in the field of migration and inter-religious dialogue in Sevilla (Asociación Claver) to the topic “Acting as Christians: What does the Church tells us”.

On Thursday and Friday afternoons the participants had the chance to attend optional experience tours, organized by the JRS International Office, where the met refugees to better understand the many challenges the refugee deal with when arriving in Rome. Other participants opted instead to discuss the themes debated in the Thursday morning sessions in small groups. The participants were also able to visit on Wednesday, Thursday or Friday afternoon Ignatian Places in Rome (Chiesa del Gesù, Chiesa Sant’Ignazio, Camerette di Ignazio di Loyola).

On Friday morning Fr Thomas Smolich SJ, the Jesuit Refugee Service (JRS) International Director, spoke about the Jesuit answer to the migration phenomenon and on what the Jesuit Refugee Service does to respond to the refugees' needs. Reflecting on the three pillars of JRS mission - accompanying, serving and advocating – Fr Smolich provided information to help the audience understand the complexities surrounding migration in a faith-inspired and comprehensive manner.

The European Encounters 2016 of the Jesuit alumni concluded Saturday morning after a Private Audience with Pope Francis.
In his address to us in the Consistory Hall, the Pope reminded us “Through your Jesuit education, you have been invited to become companions of Jesus and, with Saint Ignatius Loyola as your guide, you have been sent into the world to be women and men for and with others. At this place and time in history, there is great need for men and women who hear the cry of the poor and respond with mercy and generosity.”
Responses to the refugee crisis should be “through acts of mercy that promote their integration into the European context and beyond.”
Jesuits have an important role of providing education for refugee children, many of whom grow up without access to schools, Pope Francis said “I urge you to draw on the joys and successes that your Jesuit education has given you by supporting the education of refugees throughout the world. Together with the Jesuit Refugee Service, put your mercy in motion and help transform this educational reality. In doing so, you will build a stronger Europe and a brighter future for refugees. “.
Finally, the Holy Father urged us to transform our communities “into places of welcome where all God’s children have the opportunity not simply to survive, but to grow, flourish and bear fruit.”

The European Encounters were filled with high quality conferences and equally well prepared experience tours, with the private audience Saturday morning as peak!
We are very thankful to the JRS which contributed so much to make the European Encounters of Jesuit Alumni 2016 in Rome a success.
We are glad that all participants had the chance to meet the Pope in person.
Pope Francis asked us to help him. An excellent way to do so, is by promoting and supporting in our countries the Mercy-in-Motion campaign of the JRS and all the Jesuit fathers involved worldwide in the education of refugee children and youths.