The Altkalksburger Vereinigung AKV organized a very interesting seminar at the Kardinal König Haus in Vienna on the last October weekend 2017. Program of the meeting:

The 14 participants from Austria, Germany, Malta and Switzerland discussed topics of practical, scientific, ethical and spiritual interest regarding both, public discourse and practice of the banking and finance sector.

The discussions were preceded by introductions of professionals and/or academics:

Prof Dr Wolfgang Palaver, University of Innsbruck: „Faith and Trust: On the Need to Desacralize Money and the Market“

The seminar was opened by the head of the Jesuit Community in Vienna: 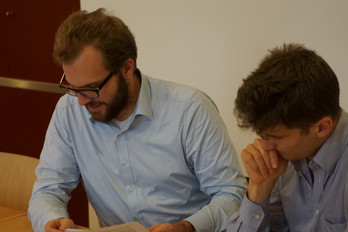 One of the two participants from Malta, Peter Cassar Torregiani summerized his impressions of the seminar like this:

It was an ideal setting to have the meeting of Jesuit Alumni in the Kardinal Koening Haus in Vienna.
The presentations on Finance and Social Justice were given by well prepared speakers and were followed by very good and fruitful exchanges between the Alumni.
The issues were about creating wealth and sharing it.
Sometimes provoking perplexity, the extensive discussions were carried on amicably in structured conversations during dinner and even after!
The participants were very sociable together, some of them knowing one another already.
The overall theme was finance and banking in relation to Catholic social teaching.
Talks included highly technical explanations of derivatives and redistribution through taxation.
The discussions centered on ethics. European civilization appeared as a fundamental issue.
Interestingly, the same weekend in the Vatican the Council of Bishops of th EU were holding their Seminar on "Re-Thinking Europe"!